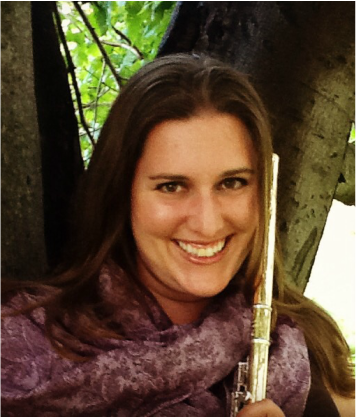 A passionate educator, performer, musicologist, and arts administrator, flutist Ashley Shank has appeared as a recitalist, chamber musician, clinician, and adjudicator throughout the United States.

Dr. Shank joined the faculty of Lycoming College as instructor of flute and chamber music in the fall of 2014. During the fall 2018 semester, Dr. Shank served as temporary assistant professor of flute at Indiana University of Pennsylvania as a sabbatical replacement for Dr. Therese Wacker. She has also been a member of the flute faculty for the Indiana University of Pennsylvania Community Music School, Illinois Summer Youth Music, Illinois Chamber Music Symposium, University of Akron Junior High Summer Band Camp and the Firestone Performing Arts Magnet. She has maintained a private flute studio since 1999 and her students have earned top chairs in district, regional, all-state, and all-east festivals, received superior ratings at solo and ensemble festivals, and continued their flute studies at the college level. Dr. Shank is a frequent clinician, adjudicator, conductor, and teacher for public school and university students throughout the country.

Dr. Shank has performed in a variety of solo, chamber, and large ensemble settings.  Solo appearances include the Nielsen concerto with the University of Akron Symphony Orchestra as the graduate-level winner of the 2009 University of Akron Concerto Competition, Brandenburg Concerto No. 4 with the Chamber Orchestra of the Alleghenies and at the University of Illinois, and as a piccolo soloist with the University of Illinois Concert Band.  She has performed and presented at the Flute Society of Kentucky's Flute Festival, Mid-Atlantic Flute Convention, and National Flute Association Convention. Since 2016, Dr. Shank has performed and recorded as co-principal flute for the International Fellowship of Conductors, Composers, and Collaborators (IFC3). A member of the Keystone Wind Ensemble, she has performed at the World Association of Symphonic Bands and Ensembles Convention and the International Trumpet Guild Convention and can be heard on eleven commercially released recordings.  In 2016-2017 she joined the Wildcat Regiment Brass Band for a series of concerts featuring the music of the Port Royal Band, a Civil War Regiment Band which incorporated wind instruments (one piccolo, one E-flat clarinet, and two b-flat clarinets). For these performances, she played a 19th century six-keyed D-flat piccolo. Currently an active freelancer in North-Central Pennsylvania where she regularly serves as an extra and substitute player with the Williamsport Symphony and the Penn Central Wind Band, she has also performed with the Altoona Symphony Orchestra, Akron Symphony Orchestra, Concert Band of Central Illinois, Johnstown Symphony Orchestra, Kankakee Symphony, Opera per Tutti, and the Penn's Woods Music Festival Orchestra. Her performances have been broadcast on WDWS radio in Champaign, IL and WQED in Pittsburgh, PA. Chamber music appearances include the Pennsylvania Music Educators Association Convention, the Kulas Concert Series, Music at the Farmstead, the Summer Flute Experience with George Pope, Williamsport Chamber Players Series, and the Williamsport Symphony Orchestra's Close-up Concerts. She has been a prizewinner of the Tuesday Music Club Scholarship Competition, University of Akron Concerto Competition, Johnstown Symphony Concerto Competition, and was a finalist for the prestigious Kate Neal Kinley Fellowship.

An avid performer of new music; Dr. Shank has premiered many solo, chamber, and large ensemble pieces.  She is a founding board member and Grants & Finances Chair of the Flute New Music Consortium, an organization with the shared mission of commissioning and supporting new music for the flute. FNMC was the winner of the 2014 National Flute Association's Arts Venture Competition and a winner of the 2014 Illinois Music Entrepreneurship (iMusE) Competition. FNMC has also been awarded grants by the Oklahoma Arts Council.

An active scholar, Dr. Shank holds a master’s degree in music history and literature. Her primary area of interest and research is the music of Russia and the former Soviet republics. Shank's master’s thesis, entitled “Composers as Storytellers: The Inextricable Link Between Literature and Music in 19th Century Russia” can be viewed on OHIOLINK.  Dr. Shank was named winner of the National Flute Association's 2015 Graduate Research Competition, for her doctoral thesis, "A Handbook of Solo and Chamber Literature for Flute by Composers from Russia and the Former Soviet Republics" which identifies almost 3,000 pieces, most virtually unknown outside of Russia and the former Soviet Republics. This award is given to "a flutist who has made outstanding contributions to flute study and to expose fine new scholarly work by NFA members and to promote the value of research."  Dr. Shank will publish an expanded online version of the thesis in 2020. The Online Encyclopedia of Flute Music from Russia and the Former Soviet Republics will eventually included expanded annotated entries, links to sound recordings, and other resources. In addition to her research interest, Dr. Shank enjoys sharing her love for many genres of music with students and previously taught Introduction to Music for non-majors at Susquehanna University.
​
Committed to education at all levels, Dr. Shank joined the music education faculty at Penn State University in January of 2020. She serves as the coordinator of the Partnership for Music Teacher Excellence-Student Teaching. In this capacity, she coordinates the student teaching program for the music education area; her duties include assigning student teacher placements, in-servicing new cooperating teachers, conducting student teaching seminars, supervising student teachers, and teaching courses. She previously held the position of Director of the Music Preparatory Program at Susquehanna University. Dr. Shank administered the prep program's early childhood music program serving as the curriculum coordinator, trained teachers, and taught early childhood music classes for children from birth to five through the music preparatory program and a partnership with Summit Early Learning (formerly Snyder Union Mifflin Child Development or SUMCD). During the 2018-2019 academic year, she served as the interim coordinator of music education at Susquehanna University. From 2017-2019, she taught music education courses at Susquehanna University including "Music for Exceptional Students" for music majors and "Arts in Education" for elementary and early childhood education majors. She has significant experience in public school education, including teaching elementary general music and arts infusion in the Urbana School District in Urbana, Illinois and choral music at Brashear High School in the Pittsburgh Public Schools. At Brashear, in addition to directing the choirs, she developed and implemented a music appreciation course entitled Understanding Music, which introduced students to a variety of musical genres, and taught class piano. Additionally, Dr. Shank taught music theory courses at The University of Akron and Susquehanna University.

Ashley Shank earned a Doctor of Musical Arts degree in flute performance and literature with a cognate in music theory from the University of Illinois at Urbana-Champaign, Master of Music degrees in flute performance and music history and literature from the University of Akron, and a Bachelor of Science degree in music education from Indiana University of Pennsylvania (major concentration in flute, minor concentration in piano).  Former teachers include Jonathan Keeble, George Pope, Alberto Almarza, Therese Wacker, Brian Luce, Carl Adams, and Jennifer Dell.